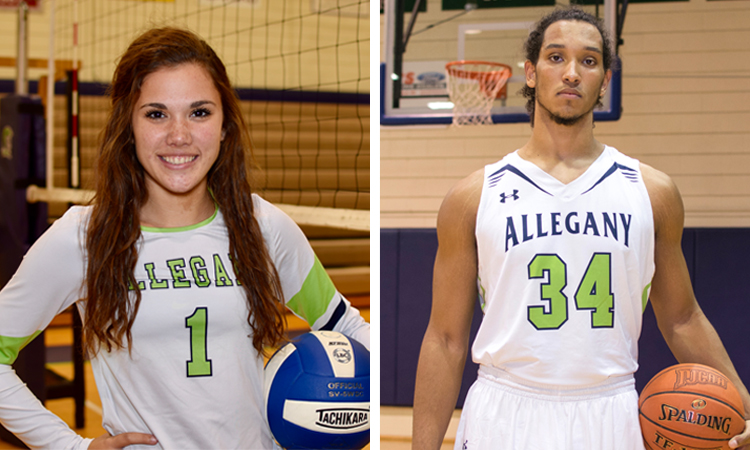 CUMBERLAND, Md. (June 9, 2020) – Allegany College of Maryland is pleased to share that Justin Copman and Madi Hott have been selected as the college’s top athletes of 2020.

Male athlete of the year, Justin Copman, returned to ACM to play as a forward with the Trojan basketball team. Despite a shortened season due to the COVID-19 pandemic, Copman was first in the nation in the NJCAA DI in total rebounds and rebounds per game. He averaged 12.3 points and 12.2 rebounds per game.

A Cumberland resident and General Studies major, Copman played, as a freshman, in the 2019 NJCAA Division I Championship Tournament. During both his freshman and sophomore seasons, he was named 1st Team All Region XX and 2ndTeam All MD-JUCO. In addition, he was selected as Student Athlete of the Month by ACM for December 2019.

At 6’7” and 220 pounds, Copman is a 2018 graduate of Allegany High School. An outstanding high school basketball player, he was voted the 2018 Player of the Year by the Cumberland Times-News. He will attend Gannon University in Erie, Pennsylvania, in the fall.

“Justin had an outstanding two years at ACM, and I know he’ll excel at Gannon [University]. On the court, he was an anchor for entire team and did everything in his power to make his team better. Off the court, he’s committed to excelling in his classes as evidenced by his strong GPA. He should be, as we are, intensely proud of his achievements during his time as a Trojan,” said ACM Head Coach Tommie Reams.

Madi Hott, a Cumberland resident, joined the Lady Trojans volleyball team as a libero. At 5’4” with 56 digs, 47 sets, 13 kills, and 17 points, Hott was a versatile, experienced defensive player in her first year of play for ACM. She was named ACM’s Student Athlete of the Month for September 2019. Hott, a nursing major, is the recipient of an Athletic Achievement Scholarship awarded through the ACM Athletics Department.

“Madi is a terrific hustler on the court who’s always looking for ways to push herself to benefit the team,” said ACM Head Coach Megan Oliver. “She developed as the season progressed and embraced challenges on and off the court as a student in our nursing program. We can’t wait to see what she does next year.”

Hott is a 2019 graduate of Calvary Christian Academy. She was named Defensive Player of the Year in both 10th and 12th grades. While attending Calvary, she was in the 1st Team All-Conference, 1000 Day Club, and named the Cumberland Times-News Player of the Month. In addition to volleyball, Hott played basketball and soccer during high school.