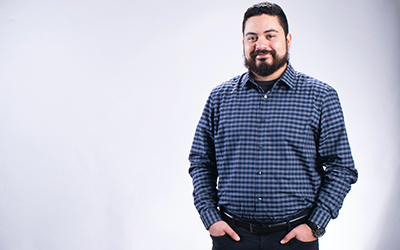 Stephen Kraft, congressional intern for the Honorable David Trone, is an Allegany College of Maryland Human Services Associate major with plans to enroll at Frostburg State University in the fall. He is ACM’s first student to intern with a Member of Congress while enrolled at the community college.

CUMBERLAND, Md. (Feb. 25, 2021) – When Congressman David Trone (D-MD 6th District) visited UPMC Western Maryland’s new Emergency Services Department Behavioral Health Unit in February of 2019, he was briefed on its plans for a Center for Hope and Healing. An advocate for individuals struggling with addiction, he delivered remarks about the opioid crisis ravaging the local area and spoke about sponsoring related federal legislation. Little did he know that standing in the audience that day was his future Capitol Hill intern, Stephen Kraft.

Trone’s words stuck with Kraft. Kraft had only lived in Cumberland for a few years. He had just returned to college full-time as a nontraditional student and was only a month into Allegany College of Maryland’s Human Service Associate program. A self-described military brat who attended Fountain-Fort Carson High School in Colorado and had tried college once before, he discovered friendship, support and community in Cumberland after years of working jobs in multiple fields.

His motivation to become a social worker and advocate for others stemmed from his own journey. After fighting his own demons and overcoming adversity, Kraft committed to his sobriety on September 14, 2018. Two years and two months after that pledge and less than a year after hearing the Congressman speak, Kraft was selected to intern in Congressman Trone’s Washington, D.C. office. He is the first student ACM has placed with a Member of Congress.

Kraft was recommended for the internship by Professor Cherie Snyder. “Given his interest in social policy, legislation and advocacy, an internship with the Congressman seemed like a natural fit for his third internship. Stephen is one of the best students I have had in my 34 years as director [of the Human Service Associate program]. Although we usually place students with direct service agencies, his skill set and work experience made him an excellent applicant.”

By the time he applied for the internship, Kraft was working and volunteering six days a week. While training to become an addictions counselor, he was employed at Archway Station and completing an internship at Maryland Wellness (formerly BACHS Healthcare) after previously interning at the Allegany [Halfway] House through the County Health Department and Potomac Behavioral & Occupational Therapy. In addition, he was serving as a Prisoner Visitation and Support volunteer at the Federal Correctional Institution - Cumberland and ACM’s student representative to the NAACP 7007 Allegany County chapter’s Community Safety and Wellbeing Committee, a group he co-chairs with Frostburg Chief of Police Nick Costello.

“Congressional interns play a key role in constituent services, something that’s especially critical during a pandemic and the difficult times we’ve been experiencing as a nation. These are incredibly competitive internships. Having Stephen represent our college in this capacity is a true point of pride,” said David Jones, ACM’s vice president of Advancement and Community Relations and Executive Director of the ACM Foundation.

His selection followed an extensive application and interview process with Andy Flick, Trone’s chief of staff, as well as a written response exercise. Due to the COVID-19 pandemic, Kraft is assigned to work remotely in the Congressman’s D.C. office from his Cumberland residence. His internship coincides with his final semester at ACM, a college work-study assignment, a new position as an addictions counselor at Maryland Wellness, and new service as a Volunteer Responder for the Maryland Responds Medical Reserve Corps. He was admittedly nervous.

In the first week of January 2021, a week that saw a riotous attack on the U.S. Capitol, Kraft officially logged into Trone’s office for the first time to begin his semester-long internship. During such an unprecedented time, his focus for fifteen hours every week is on helping constituents. He answers correspondence and assists people facing problems with federal agencies, frequently with two “assistants” at his side: his faithful canine companions, Brady and Lady.

"Stephen has been an incredible advocate for thousands of Marylanders in our office, especially the folks dealing with mental health challenges and substance use disorders during this pandemic," said Congressman Trone. "Stephen’s voice helps us better serve the people of Western Maryland by advocating for their needs and priorities, and we are lucky to have him as an intern this semester.”

After graduating in May, Kraft will transfer to Frostburg State University to pursue his Bachelor of Science degree in Social Work. For his graduate work, he is torn between pursuing his MSW or JD. “Law school wasn’t in my original plans. But as I think more about advocacy as it relates to social justice reform, a JD could enable me to help others more successfully. Whether that leads to becoming an attorney or starting a career in policy, only time will tell.”