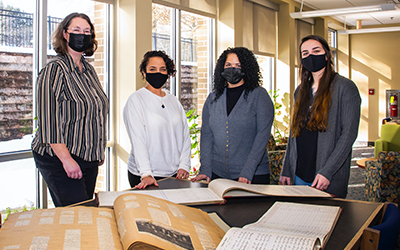 Allegany College of Maryland will host a local Community Artifact Day from 11 a.m. to 5 p.m. on March 13 in the College Library. Residents are encouraged to bring in letters, diaries, pictures and articles related to voting, the women’s suffrage movement and civil rights. L-R, Reference Librarian Barbara Browning and Tawnisha Arthur, Keaira Thomas, and Tabatha Vassar, students in ACM’s Human Service Associate program, are shown reviewing Allegany County voter registration records from the first half of the twentieth century.

CUMBERLAND, Md. (Feb. 12, 2021) – Calling all pack rats, history aficionados, community and church groups and librarians! Allegany College of Maryland (ACM) will host a local Community Artifact Day for residents in the region to bring in letters, diaries, pictures and articles related to voting, the women’s suffrage movement and civil rights.

While the grant project focuses broadly on voting rights, the women’s right to vote movement is of particular interest to Snyder and Browning because so little is known about the women’s suffrage movement in the area. “Now is a great time to ask older relatives or family friends if they know of anyone who was active locally in a church or women’s organization or who supported the women’s right to vote crusade between 1900-1920. If you learn of anyone, ask your loved ones to look through their family photographs or papers for evidence that we could scan,” said Snyder. “And please review the list of women, groups, and events available at https://bit.ly/2OrYF7X we’ve identified from our research as some may be your relatives. We want to hear from you about what you know or artifacts you have.”

The Finish HerStory Community Artifact Day is held in partnership with the Allegany Museum, the Allegany County Commission for Women and the Allegany County Women’s Action Coalition. The event is made possible by a Votes and Voices Electoral Engagement Grant from Maryland Humanities. Collected documents and photographs will be scanned at 1600 dpi. The digital files will become part of the ACM Library’s historical documents collection and will be shared through the Allegany Museum with the Smithsonian Institution’s Voices and Votes: Democracy in America initiative.

ACM Human Service Associate program students will provide event assistance. The College Library at ACM is home to the Appalachian Collection, the Janet Zastrow Cook Willa Cather and Rare Books Collection and offices of the Genealogical Society of Allegany County, Maryland. Browning will offer special appointments for those individuals unable to attend the March event. To schedule an appointment, call 301-784-5269 or email bbrowning@allegany.edu.

Under the guidance of Snyder and Browning, ACM students Tawnisha Arthur, Keaira Thomas, and Tabatha Vassar have identified through their research approximately 20 women of note as well as a number of local events from the early part of the twentieth century connected to the suffragist and early feminist movements. Women being researched include, among others, Mrs. James Cook, Ellen Harris, Mrs. Robert Henderson, Mrs. William Menefee, Florence McKaig, Mrs. Garrett Smith, Anna Belle (Darr) Troxell, and Isabelle Wheeler. The college is asking the community to “dig up” artifacts to round out profiles of these women and others with ties to women’s suffrage.

These artifacts – diaries, pictures, memorabilia, and old newspaper articles – may be brought to the Finish HerStory Community Artifact Day. Once digitalized, they will be used for further research. If a community member is unable to attend that event, they are asked to call 301-784-5269 or email bbrowning@allegany.edu to schedule an appointment.

To date, the findings have proved both fascinating and revealing, according to the student-researchers. “It’s interesting to see the pioneers who led the way for this [a woman’s right to vote] and how much work they had to go through to be seen and heard. If they didn’t take those kind of extreme measures like the Suffrage Hike through Allegany and Garrett counties, how far would they have gotten by taking small, socially acceptable steps?” said Vassar.  “I took for granted my right to vote.”

“I found that you have to research the men [spouse or relative] to find the identity of the women. The biggest challenge is simply the absence of information because of the time period,” said Arthur. “When I did find something, I was surprised by how vocal the women were.” Thomas, her sister, echoed Arthur’s comments. “Their history is behind the men in their lives,” she added.

Two of the women the students researched were Florence McKaig and Ellen Harris. Florence (Pearre) McKaig (Mrs. Merwin McKaig) was a woman of high social standing whose U.S. Congressman brother voted against women’s suffrage while she founded the Just Government League, a women’s suffrage organization in Allegany County, and pioneered free health services for economically disadvantaged women at the Western Maryland Hospital. Ellen Harris (Mrs. Edward Harris), the second president of the Just Government League, was a community activist who led suffrage protests and marches at local resorts during peak tourist season. When she questioned a member of Congress at a public event who supported a woman’s right to vote but voted against a bill to allow it, he stated that his vote was based on his desire to disallow the votes of Black women.

Thomas, who researched Harris as part of the project, was disheartened by this finding. “Even though you know [that racism existed], getting facts that back up what you assume was going on is different. It can be frustrating to read or imagine hearing. You wouldn’t expect it would come out of their mouths,” she explained. “But you quickly find that your dig up the good and the bad in this research. You see [evidence] that men disregarded and ignored women, even those in their own families on this issue.”

“You know the oppression that women face, especially women of color, but it really throws you for a loop to hear it,” added Vassar.