ACM was selected for the annotation through SEA-PHAGES’ “phage adoption" program. Dignity, shown photographed through an electron microscope, was discovered in 2015 by Hope College students. 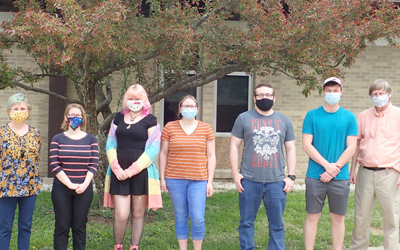 CUMBERLAND, Md. (Oct. 15, 2021) – Five Allegany College of Maryland students – Haley Bloom, Joshua Hershey, Lily Johnson, Colt McDonald, and Cheyenne Wright, two freshman and three sophomores – annotated and published the genome for the Mycobacterium phage Dignity this past spring. Guided by Steven Heninger, a professor of physics, and Michèle Barmoy, an associate professor of biology, the student’s explanation of Dignity’s DNA may be used in the creation of medical therapies and treatments.

ACM is the only Maryland community college to be part of the SEA-PHAGES (Science Education Alliance-Phage Hunters Advancing Genomics and Evolutionary Science) undergraduate research program. Dignity was discovered in 2015 by Hope College students in Menomonie, WI, and ACM was selected to annotate its DNA strand through SEA-PHAGES’ “phage adoption" program. Its recent published annotation, available at www.ncbi.nlm.nih.gov/nuccore/MZ622171, is the college’s third.

The students’ work was part of their PhageHunters phage genomics/bioinformatics lab associated with the college’s Biology 102 course. Through the SEA-PHAGES program curriculum from the Howard Hughes Medical Institute, ACM students, along with other students from over 100 colleges internationally, contribute to the discovery of new viruses that specifically target bacteria.

The PhageHunters used online programs, DNA Master and tRNAscan-SE, to make gene calls and find transfer ribonucleic acids (tRNAs) to decode proteins in the DNA. With Heninger and Barmoy’s guidance, they carefully reviewed the auto-annotation provided by DNA Master and tRNAscan-SE for accuracy. The students used a comparative genomics and visualization program called Phamerator to compare their findings for Dignity with the larger collection of Actinobacteria phage genomes. Phamerator groups phages into “Phamilies” and allows users to view, compare, save and print color-coded genome maps.

“Students are a little ‘wide-eyed’ at first in the genomics/bioinformatics labs but they adjust quickly. They can take the lab as a stand-alone class if they’ve taken a prior 200-level biology class. Cheyenne [Wright], a medical laboratory technician student, chose that option,” said Heninger. “I think it matters that they’re contributing valuable research with real-world implications.”

Nine students are enrolled this fall in the phage discovery/microbiology lab being taught by Barmoy and Heninger. An unlimited number of students may enroll in the genomics/bioinformatics lab for the spring 2022 semester as the class can be divided into small working groups to analyze and annotate two or more phages.

For more information about ACM’s PhageHunters program or transfer degrees in the sciences, individuals are encouraged to contact Dr. Donna Brunelli, department chair, at 301-784-5246.