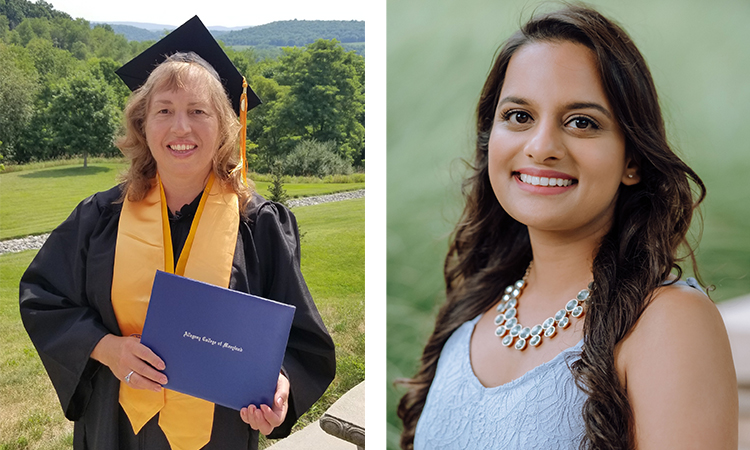 CUMBERLAND, Md. (July 31, 2020) – As Allegany College of Maryland celebrates the accomplishments of 324 spring and summer ’20 graduates during its virtual ceremony on August 7, two nontraditional speakers will be providing its student commencement address – Carol Lusk of Schellsburg, Pennsylvania and Khushmani Singh of Leesburg, Virginia. Their pre-recorded speeches will be shared during the virtual ceremony that is scheduled to be livestreamed on ACM’s Facebook page at 6 p.m.

Lusk, a General Studies and Teacher Education – Secondary Area of Concentration major, graduated from Central High School in 1983. After earning a certificate from Appalachian Bible College, she chose to be a stay-at-home mother and self-taught artist for nearly 30 years before enrolling at ACM at the recommendation of her daughter. Following her husband’s unexpected death, Lusk decided to fulfill her dreams of becoming an art teacher. One of her favorite moments at ACM was guest teaching a group of Washington Middle School students. Working together, they painted a large group picture of an eagle that was framed and donated to a local Veteran's Home. Lusk will begin pursuing her degree in Fine Arts this fall at Frostburg State University. In her commencement address, she will talk about life’s unexpected challenges, the importance of compassion, and the need to follow your heart when your world is turned upside down. Lusk will be introduced by a Dr. Ron Jenkins, a recently retired Associate Professor.

Singh, a Dental Hygiene major, graduated from Stone Bridge High School in 2012. She attended Virginia Commonwealth University and graduated with her bachelor’s degree in Psychology in 2016. Singh, the daughter of a physician, was drawn to the healthcare industry. She worked as pediatric dental assistant and learned to thrive in an office environment before applying to ACM’s dental hygiene program. She enrolled in the college’s program because of its reputation and small cohort size “which quickly became like family.” Singh especially enjoyed working in the college’s dental clinic, where she had the opportunity to immediately improve the dental health and well-being of community members. She is currently employed part-time as a dental hygienist. In her commencement speech, Singh will discuss perseverance and appreciating the lessons and skills one learns when their resolve is tested. She will be introduced by Assistant Professor Jennifer Thompson.

ACM students with a 3.5 or higher GPA were invited to audition to speak. Lusk, a Spring ’20 graduate, and Singh, a Summer ’20 graduate, were selected by the college’s Commencement Committee. Their speeches were professionally recorded by ACM Professor John Bone.