A New Day For Allegany College of Maryland Athletics 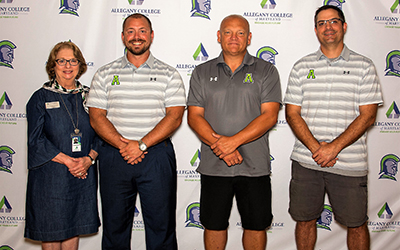 Michael Carter II, ‘98
Carter joins ACM as a full-time assistant athletic director of development and success, and the third baseball coach in ACM’s 58-year history. He was the head baseball coach at Community College of Baltimore County (CCBC) Essex from 2011 to 2019 and its 2010 pitching coach. He spent seven years as a physical education and health teacher at Baltimore’s Digital Harbor High School.
Carter led the CCBC Essex Knights to a NJCAA Region XX Division II title in 2016, a NJCAA Northeast District title in 2018 and NJCAA Division II Baseball World Series appearance, also in 2018. In that same year, he was named Maryland JUCO Baseball Coach of the Year, the American Baseball Coaches Association/Diamond NJCAA Division II Northeast Regional Coach of the Year and the Maryland State Association of Baseball Coaches’ Coach of the Year.
Carter was part of the management and coaching staff for the Baltimore Red Birds of the Cal Ripken Collegiate Baseball League. He was adjunct faculty at CCBC, and a physical education teacher for St. Pius X School and Kennedy Krieger School. Carter was ACM’s assistant head coach from 2001 to 2006 under Steve Bazarnic during which time ACM had one NJCAA World Series appearance.
An Allegany High School graduate, Carter played infield (first and second base) at ACM from 1996 to 1998, appearing in the NJCAA College World Series in 1997. He earned an associate degree in general studies from ACM in 1998, a B.S. in physical education from Fairmont State College in 2001 and M.S. in athletic coaching education from West Virginia University in 2003.
As an assistant professor, Carter will teach Personal Wellness and Foundations of Training I courses this fall at ACM. He received special recognition at the 71st Dapper Dan Award program in 2019. Carter, his wife Kristen, and children, Eliza, Maris and Finley, reside in Cumberland, Maryland.

J.R. Perdew, ’87, ’91
Perdew joins ACM in a part-time capacity as an assistant athletic director of recruitment, fundraising and community relations. He currently serves as an assistant pitching coordinator for the Chicago White Sox, a position he has held since 2016. Perdew coordinates spring training and instructional league, supervises nine pitching coaches and develops 100 minor league pitchers and major league pitches on rehab assignment for the White Sox. He manages the development of prospects valued at $5-15 million per season for the White Sox.
From 1997 to 2016, Perdew served as part of the White Sox development team, where he developed 126 pitchers and 17 catchers in the major leagues. He was a part of the White Sox’s coaching team during their championship win during the 2005 World Series.
Working in rookie ball, Low-A, High-A, and Double-A, Perdew created teams that resulted in four minor league championships (for the Bristol White Sox, the Burlington Bees, the Winston-Salem Warthogs and the Kannapolis Intimidators) and 11 division championships. In 1999, 2004 and 2005, he was a pitching coach for Pastora de los Llanos and Caribe de Oriente, professional baseball teams in Venezuela, where he was responsible for pitchers and catchers and division titles.
Perdew has conducted pitching and hitting clinics and private lessons for youth baseball players Maryland, New York and Pennsylvania.
A Fort Hill High School graduate, Perdew was a pitcher at ACM and played for the Trojans in the 1984 JUCO World Series. He earned an associate degree in university studies in 1987 and an associate degree in recreation leadership in 1991 from ACM. He served in an infantry position in the U.S. Marine Corps from 1987 to 1989. From 1989 to 1997, Perdew was ACM’s assistant coach under Steve Bazarnic, a period in which the college had six JUCO World Series appearances, 17 pitchers signed Division 1 and Division 2 scholarships and 11 pitchers signed pro contracts. While coaching for ACM, Perdew earned a B.S. in physical education/health in 1992 and his M.Ed. in 1995 from Frostburg State University.
In his position as assistant athletic director of recruitment, fundraising and community relations for the college, Perdew will manage a wide range of activities, from scouting talented student athletes to developing ACM’s athletics resources and community-focused initiatives. Some of his duties will include “coaching the coaches,” building sponsorships and support for athletic programs, fundraising for scholarships and coordinating sports camps, clinics and seminars.
In 2012, he earned a National Association of Collegiate Directors of Athletics Certificate from the U.S. Sports Academy. Perdew was honored in 2008 with the 61st Dapper Dan Award’s George W. Stevenson-Nicholas A. Perlozzo Memorial Award for bringing the most national recognition to the Cumberland area through athletics. Perdew, his wife Reina, and children, Marié, Jesús, and Mariela, reside in Short Gap, West Virginia. He is fluent in Spanish.

ABOUT ALLEGANY COLLEGE OF MARYLAND
Ranked among the top 20 community and technical colleges in the country by the Brookings Institution, Allegany College of Maryland (ACM) offers world-class education in a caring environment that transforms lives, strengthens communities and celebrates life-long learning. Serving more than 3,000 credit and 7,000 continuing education and workforce students annually, ACM offers over 80 associate degree, certificate, and letters of recognition programs at affordable rates. To learn more, visit allegany.edu or call 301-784-5000.